Because images speak much louder than words and because the stories of our fellow human beings teach us much about ourselves, we present to you this vasty program about the representation of migration in film, together with the WCA filmfestival.

During this program, we’ll investigate what it means to be in a place where you don’t belong, weren’t born, aren’t rooted. We look at migration through four different films, from four different perspectives, from four corners of the world, and with four different protagonists. They are young and old, on the run or (temporarily) settled.  What does it mean for a human being to migrate? To leave everything behind and rebuild it all in a different place but with continuous uncertainty and a constant and dormant longing for a place called home.  We’ll watch clips from the WCA films Fighter (Jeró Yun, South Korea), Ensilumi (Hamy Ramezan, Finland/Iran), Eyimofe (Arie & Chuko Esiri Nigeria) & The Man who Sold his Skin (Kaouther Ben Hania) and discuss them with four special guests.

Fighter (2020) / Directed by Jéro Yun
Fighter is a character study of a woman, excellently played by Lim Seong-mi, for whom keeping her head up is a daily struggle in itself.

After successfully escaping North Korea and spending months in a social inclusion facility, Jina moves into her new apartment in Seoul. However, the path to a self-determined life continues to challenge the young woman. Her mother, who has become a stranger to her, lives somewhere in town, while her father is still stuck in the north. In order to raise the money for his escape, Jina toils day and night. Following a period of setbacks, she changes her tactics. While working in a gym, she puts on her boxing gloves. The sheer tension of her body reflects the struggle for recognition far beyond the boxing ring. The film carefully tells the story of a refugee’s fate in a divided country, the inner border which is not just on the map.

About Germaine De Randamie
The healing power of sport, of perseverance ánd willpower, how sport can open the gates to new worlds and completely change lives, Germaine De Randamie (1984, Utrecht) knows all about it.The Surinamese-Dutch fighter, who grew up in Utrecht, learned the hard lessons of life at a young age and turned out to be a great kickboxing talent early on.As a teenager she fought free by literately training day and night and eventually reached the absolute world top in kickboxing with an unbeaten record of 46-0, including 30 knockouts.She is currently ranked as the highest in the world in the sport of Mixed Martial Arts, or MMA.De Randamie is therefore not just called The Iron Lady, she has been fighting like mad at the world top of martial arts for more than 20 years and she always comes back stronger even after a defeat. Regarding the film Fighter, Germaine de Randamie will talk about her own experiences as a starting female boxer and kickboxer and how martial arts can drastically change lives and set mán & women free.

Ensilumi (2020) / Directed by Hamy Ramezan
Director Hamy Ramezan shows how people manage to keep their dignity even when faced with an indifferent government that can determine their future at the stroke of a pen.

Rain-soaked Finnish forests bathed in a nebulous haze. Every morning, the 13-year-old Ramin is awakened tenderly by his mother. The Mehdipour family encounters everyday life in a refugee accommodation in a quiet, simple manner, full of humour and warmth. In the here and now, every moment is savoured as if there were no tomorrow: time with friends, new encounters, parties and – for Ramin – falling in love for the first time. And yet, it is clear that if the family’s application for asylum is denied, which could happen any day, things will change abruptly. Moments of courage and joy, despair and worry all add to the loving portrait of a child and his family who, on the threshold of a new life, never lose their dignity.

About Kaweh Modiri
Kaweh Modiri (1982, Iran) fled his native Iran when he was six years old, along with both his parents, after his older sister Mitra was killed by the regime.He majored in Theater Studies at the University of Amsterdam and graduated from the Image & Language department at the Gerrit Rietveld Academy.As an artist, Modiri dedicates his oeuvre to ‘The Outsider’: what is it like to be somewhere where you don’t quite belong, to lead the life of someone else, to have to settle down somewhere where your roots don’t lie.He wrote a book about it (Mr. Sadet & the others, Mitra) and made films about it, including the highly acclaimed Bodkin Ras about an young Iranian fugitive trying to find his reposal in a small Scottish village and the recently released Mitra about the gruesome murder of his sister Mitra and its aftermath within his family.

Eyimofe (2020) / Directed by Arie & Chuko Esiri
In their feature debut, twins Arie and Chuko Esiri present a true picture of everyday life in Lagos, a city where the road to a better life is fraught with many obstacles.

This stunning debut drama, set in colorful, chaotic Lagos, the Nigerian capital, is made by twin brothers, Arie and Chuko Esiri. Not unlike many working class Americans, the two main characters are just one piece of bad news away from a precipitous fall into poverty. Both are scrambling to overcome Kafkaesque obstacles placed in the way of obtaining passports to quit Nigeria for Europe.

About Chuko Esiri
Born in Warri, Nigeria, from an early age Eyimofe directors Arie and Chuko Esiri (1985) share more than being twins – a passion for cinema and storytelling. But they both found their own path to film in different manners. Arie has a background in photography, and studied Screenwriting and Directing at the Columbia University School of the Arts. Chuko has a background in law and theatre.

When they had come a long way in both their careers, they realized that they wanted to tell the stories of home, their native Nigeria, the country they once left behind. “The country that people think they know, about which they have an opinion, but that you can only really understand if you have really experienced it”. They tell the stories from their Nigeria together as the directing brothers Esiri now. Eyimofe Is their first feature film about the struggle and aspiration of the ordinary Nigerian. Because what is it like to live in Nigeria these days. And what if you have left your country and seem to have drifted so far apart from it that you no longer know whether you can still settle in. Being an outsider in your own native country is what Eyimofe is all about. We’re going to talk to Chuko Esiri about it.

The Man who Sold his Skin (2020) / Directed by Kaouther Ben Hania
His own body turned into a living work of art and promptly exhibited in a museum, Sam, a Syrian refugee, will soon realize to have sold away more than just his skin.

Sam Ali, a young sensitive and impulsive Syrian, left his country for Lebanon to escape the war. To be able to travel to Europe and live with the love of his life, he accepts to have his back tattooed by one of by the World’s most sulfurous contemporary artist. Turning his own body into a prestigious piece of art, Sam will however come to realize that his decision might actually mean anything but freedom.

About Renzo Martens
Renzo Martens (Terneuzen 1973) absolutely does not shy away from criticism and provocation in his work. Twice he caused discussion ánd commotion with works of art made about Congo. In 2008 the controversial documentary ‘Episode III: Enjoy poverty’ was denounced by some critics as immoral, hailed by others as a confrontational work of art. Martens filmed in Enjoy Poverty how he went to Congo and tried to explain to plantationworkers there that their grinding poverty is a commodity that you can export, just like the gold, coltan and diamonds that are extracted from the ground on behalf of foreign companies. According to Martens, poverty is exploited by photographers, for example, who earn money from images of starving children and victims of the civil war. Why don’t you make those images yourself, he asked Congolese photographers who normally photograph parties. And last year there was the next highly controversial art project by Martens with his White Cube: in Lusanga, a remote village in western Congo, a bright white building now stands in the luscious greenery. A museum, designed by the highly acclaimedarchitects of OMA (Rem Koolhaas). The building was called White Cube – a term used in the art world to describe a modern, sterile exhibition space. Martens built the building more to show that art can and should also exist in places where poverty and scarcity prevail. We talk to Renzo Martens about the power of provocative art. 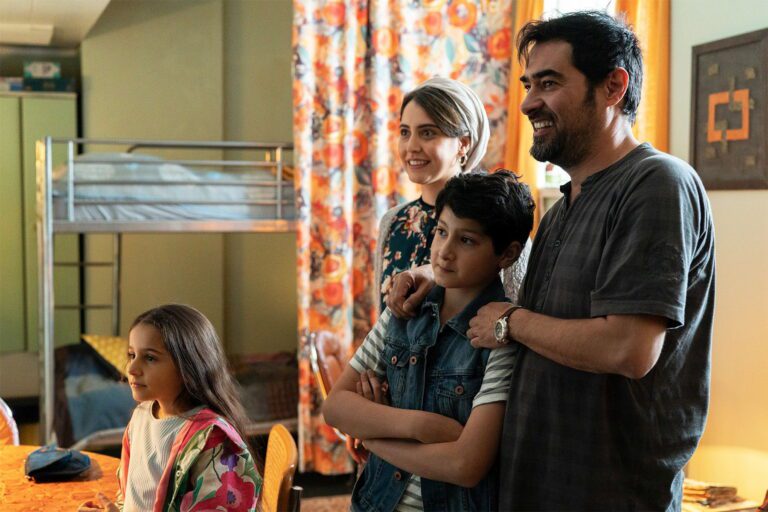 In his feature debut with this topical coming-of-age story, director Hamy Ramezan shows how people manage to keep their dignity even when faced with an indifferent government that can determine their future at the stroke of a pen. The story is based on his own experiences. 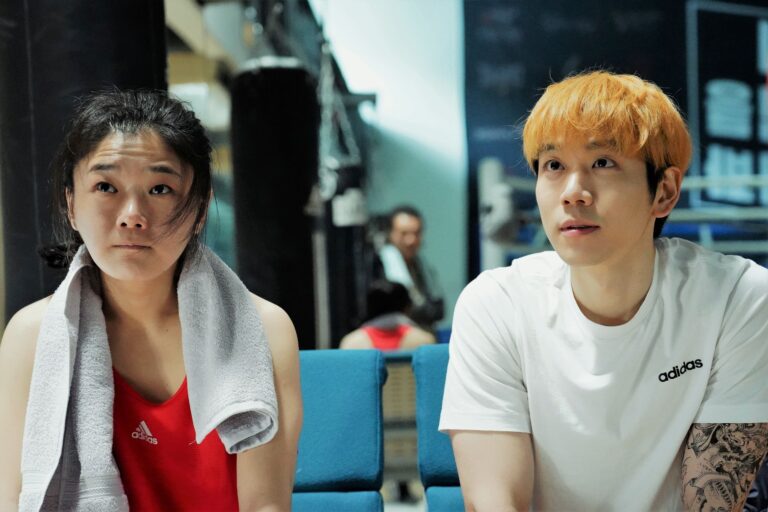 Fighter is a character study of a woman, excellently played by Lim Seong-mi, for whom keeping her head up is a daily struggle in itself.